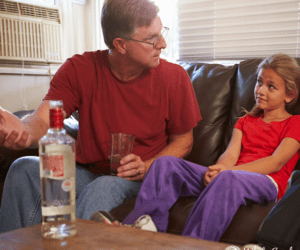 The relationship that a daughter has with her father has a profound impact on her. The father-daughter relationship determines the thoughts, feelings and identity that a daughter may establish regarding future relationships with other men. How the father interacts with the daughter affects her self-image, trust issues, and physical, mental, and spiritual health.

A daughter’s first relationship with the opposite sex is usually with her father and that relationship serves as a blueprint for future relationships with men. As the daughter grows up she subconsciously may be attracted to men who treat her with the same value and compassion as her father. If the father did not give his daughter the love and value she needed, she may look for a man that treats her the same way.

When a father is addicted to drugs or alcohol it affects his relationship with his family. He may not even be aware of his negative words or actions because he is stoned or drunk. But negative behavior will have a great impact on his children and can affect them in many ways. Daughters need to feel loved and protected by their father and when these needs aren’t met the negative message from their father will be hard-wired into the daughter’s mind.

Some addict fathers can be very disapproving in their attitude toward their daughters. They can be emotionally distant, and physically and/or verbally abusive. This type of behavior creates a distorted impression of the self in the mind of the daughter. She may begin to feel inadequate, guilty, unworthy, vulnerable and frightened. All these negative messages will not only affect her psyche but also her physical body.

Her stress level will increase and affect her nervous system and other functions of the body. Fear can cause anxiety, depression, psychosis, withdrawal, rebellion and more. The more vulnerable the daughter feels the more she may experience adverse symptoms.

Fathers who come home drunk and stoned can be physically violent to their spouse and children. Domestic violence causes many traumatic experiences for young children that affect them for many years, and some for life. Domestic violence is not caused by substance abuse but there is a correlation between the two.

Research shows that domestic violence is usually caused by perpetrators who have high levels of alcohol or drugs in their system. Approximately sixty-one percent of domestic violence offenders use or abuse drugs and alcohol.

Many offenders try to blame the violence on the substance abuse because it causes them to be “out of control.” But even after rehabilitation, most offenders continue to batter their victims. Women of abuse are more likely to use alcohol and drugs as a way to cope with the problem. Fathers of substance abuse are more likely to physically and emotionally abuse their children, causing severe psychological damage to the children.

The sexual abuse of the father to the daughter is another form of violence on the child. The mother may or may not be aware of the problem and may choose to not intervene to avoid further violence against herself or the child.

These forms of violence lead to many psychological problems for a young girl. The cycle of family violence may also be repeated by the victim when they are older, because violence is a pattern of learned behavior. Violent behavior is due to a lack of other learned or observed stress responses. Daughters of violence and abuse often learn survival and adaptive behaviors to survive.

Neglect and absenteeism are other problems that arise when the father is addicted to drugs or alcohol. He may lose his job because he cannot function adequately and this can lead to money problems. The father may go out to drink or do drugs and not return home for days at a time. He may also cause chaos when he is home. These things all have a negative effect on the daughter who only wants her father’s love and approval.

Reversing the devastating effects of the father-daughter addict relationship may take years of psychological counseling, but it can be achieved.