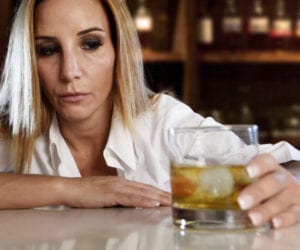 Women and Alcohol: Celebrities and Public Figures Open Up About Their Battles with Alcoholism Proving This Disease Can Affect Anyone

For many people, a cocktail, a beer or a glass of wine is a normal part of getting together while enjoying a gathering with friends or family or savoring a meal. The occasional drink can have a relaxing effect, and wine has even been proven to have health benefits. However, for mother of two and celebrity actress Alison Porter from Curly Sue, drinking alcohol nearly killed her & was more of coping mechanism than social activity. Retired USA Soccer Star, Abby Wamback, shares a similar struggle in that overtime she became addicted to alcohol as a result of using drinking to hide pain.

Wamback, has a book coming out in which she admits her struggles with prescription drugs and alcohol abuse developed overtime, and despite pleas from family and friends until her DUI she was in denial a problem existed. Her struggles with retirement, coming out as a lesbian, marriage problems, and years of emotions led her to use alcohol and prescription drugs to feel numb. Though many believed her retirement influenced her alcoholism, Wamback admits that she was struggling for years with substance abuse and everyone around her hid her secret trying to protect her. Her DUI was a wakeup call and her rock bottom as she was forced to face her problem now that the whole world knew.

Problem Drinking and Alcohol Use Disorder

Problem drinking is a term that simply means drinking alcohol in a less-than-responsible way. It usually involves binge drinking, consuming large quantities of alcohol at one time in order to get very intoxicated; however, having just two or three drinks and then driving could also be considered problem drinking.

It’s very common in the United States to problem drink every now and then. You can get carried away at a party or misjudge how much you’ve drank at an all-day event.

The trouble is that for some occasional problem drinking becomes a part of everyday life. Individuals who regularly engage in problem drinking have a condition called alcohol use disorder. The National Institute on Alcohol Abuse and Alcoholism estimates that 7.2 percent of adults, roughly 17 million people in the U.S., suffer from alcohol use disorder.

Women and Alcohol Use Disorders

Women in general but especially women over the age of 25 were studied and surveys found that factors which contributed to women’s alcohol abuse and drug abuse included depression, insecurity, difficulty balancing life, work, marriage, parenting, and past trauma.

Are You Suffering From Alcohol Use Disorder?

So how do you know if you’re a habitual problem drinker? Here are some warning signs:

If you’re exhibiting any of these signs of alcohol use disorder, help is available.

We are experienced in studying the addiction patterns of women and understand the treatment outcomes. We strive to prove the best women’s rehab programs and provide therapies which are targeted towards female needs.