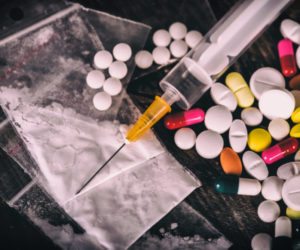 With drug addiction at an all-time high in the U.S. it is important to familiarize yourself with the most addictive drugs. Many people, especially the young, who decide to recreationally try drugs do not realize the high risk of addiction that these drugs pose. Even some prescription drugs have a high risk potential for addiction, even when the drug is being taken at the proper dosage. We should all be aware of the physical and psychological dangers of these drugs before we consider putting them in our body. Below is a list of the most addictive drugs on the illicit and legal markets:

1.) Heroin tops the list as the most addictive drug in the world. As an opiate, heroin binds to the opioid receptors in the brain and creates an intense euphoric feeling by flooding the brain with dopamine. With continued use, the brain will discontinue making natural dopamine and will depend on heroin to supply it. This need for dopamine causes intense cravings for the drug, and without it the addict will experience intense withdrawal symptoms. Heroin is one of the hardest drugs to quit, and withdrawal from the drug can create extreme pain and respiratory arrest. Heroin addicts should not try to quit the drug on their own, but get help from qualified medical professionals at a drug rehab center.

2.) Crack cocaine also floods the brain with dopamine which creates intense feelings of pleasure and euphoria, and the user can become addicted after the first time using the drug. The drug is a potent stimulant that can affect the body and mind with effects such as a rapid heart rate, muscle spasms, respiratory failure, depression, psychosis, stroke, anger, paranoia, hostility, seizures, brain damage, kidney failure, convulsions, suicidal ideation and death from overdose.

3.) Nicotine is a legal, highly addictive substance that is difficult to stop using but can be done. The National Institute on Drug Abuse (NIDA) reports that among the 35 million American smokers, 85% who quit the habit will relapse within a week. Nicotine increases the level of dopamine in the brain and also alters the nicotinic receptors. Over time the regular use of nicotine sensitizes and decreases the amount of nicotinic receptors in the brain, and the user will need the nicotine to produce normal brain function.

4.) Oxycodone is one of the most addictive prescription drugs with brands names like Percocet and OxyContin. It is an opioid drug that creates feelings of euphoria and pleasure in the user. Oxycodone alters the way the central nervous system and brain perceive pain and is prescribed as a sedative painkiller. Physicians have been prescribing Oxycodone at alarming rates, and many patients have become addicted to the drug.

5.) Xanax is a prescribed benzodiazepine drug used for the treatment of anxiety disorders and panic attacks. It is a central nervous system depressant that has a fast-acting, sedative and calming effect on the user. Xanax is the most abused prescription drug in the U.S.

6.) Methamphetamine is a highly addictive drug that affects brain function by altering the dopamine and norepinephrine levels in the brain. Levels of dopamine in the brain can be raised to ten times the normal amount when using methamphetamines. The use of the drug alters the production of natural adrenaline which creates energy and alertness. Effects of the drug include talkativeness, elevated blood pressure and heart rate, hyperthermia, euphoria, increased energy and concentration, irritability, psychosis, homicidal or suicidal behavior.

7.) Alcohol is one of the most abused substances in the U.S. and also one of the most difficult to quit. It affects the central nervous system and floods the brain with endorphins. Alcohol affects the area of the brain called the nucleus encumbers which is linked to addiction and the pleasure center. It also affects the prefrontal cortex of the brain which controls executive functions such as decision making and proper judgments. For this reason alcohol has a high abuse and addiction potential, and is difficult to stop once addicted.

This is our list of the most addictive drugs currently on the market. According to NIDA, the most addictive prescription drugs fall into three categories stimulants, depressants and opiates. There are many other illegal addictive drugs which are too numerous to mention here. And there are many new designer drugs being manufactured and sold on the illicit market. It is up to us to be vigilant of the dangers of all of these drugs.