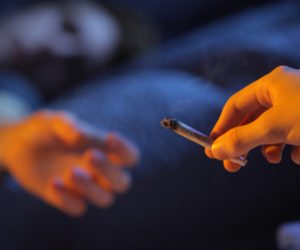 Everything you need to know about synthetic marijuana

What is synthetic marijuana?

Synthetic marijuana is created by spraying man-made chemicals known as synthetic cannabinoids onto dried, shredded plant material. It can be smoked, brewed into a tea, or vaporized in e-cigarettes. Synthetic marijuana belongs to a class of drugs known as NPS or “new psychoactive substances” that have flooded the market in recent years. They are unregulated psychoactive substances that have been developed to copy the effects of illegal or restricted drugs.

The chemicals used to make synthetic marijuana are illegal to possess, sell, or use in the United States. Because synthetic cannabinoids are chemical formulations made in labs, manufacturers are constantly adjusting their mixtures, repackaging them, and selling them in a slightly different format. They are marketed under an ever-changing list of names such as Green Giant, Scooby Snax, and Trippy, repackaged as different substances such as bath salts and herbal incense, and labeled as “not for human use” to try to sidestep regulations.

No. According to the CDC, U.S. poison centers in 48 states receive thousands of calls related to synthetic marijuana and K2 drug side effects every year. The side effects are serious and can include agitation, tachycardia (a very fast heartbeat), drowsiness, lethargy, vomiting, and confusion. Fifteen deaths were attributed to the use of synthetic cannabinoids in just the first half of 2015, and the death toll of this lethal drug continues to rise.

How does synthetic marijuana compare to cannabis plants?

Synthetic cannabinoids act on the same brain cell receptors as THC, the primary psychoactive compound in cannabis plants, but there are significant, dangerous differences. Synthetic cannabinoid users report some effects similar to those produced by marijuana, such as euphoria, relaxation, and altered perception, but also produce vomiting, violent behavior, and rapid heart rate, which are generally not associated with marijuana use.

Growing anecdotal evidence of the medical benefits of cannabis-derived remedies in treating some of the symptoms of Tourette’s syndrome, anxiety disorders, epilepsy, and pain have led to the legalization of medical marijuana in many states. Synthetic cannabinoids are entirely synthetic and do not contain the same natural compounds that produce these beneficial effects.

What are some of the side effects of synthetic marijuana?