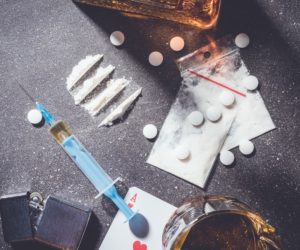 Want to know about the most addictive drugs and how they can affect you?

When determining what the most addictive substances are, research scientists agree that specific factors should be considered. One factor to consider is how easily someone who tries the drug can become addicted to it. Some drugs are more highly addictive than others, and the body can easily build up a tolerance to certain drugs that may lead to addiction. There are also specific prescription medications that can be addictive when the suggested dosage is abused or taken long-term.

Other factors to consider are what the withdrawal symptoms are if the drug is reduced or stopped, how severely the drug affects the dopamine system in the brain and body, and how much harm the drug causes physically and psychologically. Most researchers agree that some of the most addictive substances are:

Heroin is listed as the most addictive substance known to man. On a 0 to 3 scoring table, heroin scored a 2.89. Research has shown that heroin causes dopamine levels to skyrocket so far out of the normal range that they can be dangerous. Opiates are the most addictive drugs, whether legally prescribed or illegally purchased. Some of the many side effects of heroin use include respiratory depression, a weakened immune system, kidney or liver damage, heart valve infections, mood swings, depression, memory loss, anxiety and hostility.

Nicotine comes in second on our list of most addictive substances with a 2.82 rating on the scoring table. It is estimated that approximately 40 million Americans smoke cigarettes according the Center for Disease Control (CDC). NESARC concluded in their research that over two-thirds of individuals who smoke will become addicted to nicotine, which can raise dopamine levels up to 40%. Some adverse effects of nicotine addiction are congestion, sinusitis, artery wall plaque, thrombosis or clot, decreased physical performance, increased heart rate and blood pressure, lung cancer, COPD, emphysema, premature hair loss, early menopause, and asthma. Second-hand smoke contains a minimum of 250 toxic chemicals (50 of which can cause cancer) that can affect an individual in a short amount of time.

Alcohol is the third most addictive drug on the market and scored 2.13 out of 3 on the scoring table. Because it is legal many people overlook its addictiveness and adverse affects on the brain and body. In the laboratory, alcohol was shown to increase dopamine levels on rats from 40% to 360%. It is estimated that about 22% of people who abuse alcohol will become dependent on the drug. Some adverse effects of alcohol include liver disease, malnutrition, anemia, infectious diseases, dementia, and pancreatitis and nerve damage.

Cocaine is the fourth most addictive substance on our list, ranking 2.13 out of 3 on the scoring table. Current research shows that dopamine levels may increase three times the normal level when using cocaine. The drug prevents neurons from blocking dopamine signals, causing an abnormal response to the brain’s reward center that increases dopamine levels. Research shows that cocaine is one of the most addictive drugs available and that it severely affects brain cells by causing them to destroy themselves. Approximately 21% of individuals who use cocaine will become addicted to it according to the research results of the National Epidemiologic Survey on Alcohol and Related Conditions (NESARC). Adverse effects of cocaine include seizures, heart attack, stroke, violent mood swings, bizarre behavior, paranoia, anxiety, panic, coma and death.

Barbiturates come in fifth on our list, ranking 2 out of 3 on the scoring table, and are one of the most addictive prescription drugs. They are still available by prescription and purchased illegally on the street. Barbiturates have been replaced to a large extent by benzodiazepines, because they are so highly addictive. Some side effects of barbiturate use are sedation, mood swings, anger, slurred speech, and impairment of executive functions, depression, self-injury, shallow breathing and memory impairment.

Drug addiction is considered a chronic brain disease that creates a compulsive need to use drugs, regardless of the negative consequences that their use may create. Drugs alter the brain both physically and chemically and can cause permanent damage to both the body and mind of the user. Individuals, who use the most addictive drugs recreationally, may be setting themselves up for addiction that will be difficult to break without the professional help of addiction specialists. If you are addicted to drugs, you can receive the help you need to recover and regain your life at a drug rehab center.