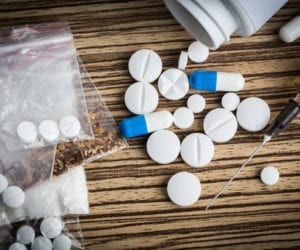 There are many different types of illicit drugs and their effects vary. Illicit drugs are those deemed illegal to make, sell and use without government authorization, plus the misuse of prescription medications and household substances may also be considered illicit drugs. Illicit drug use affects all ages and can get its start during adolescence. The use of marijuana, prescription drugs, glue, toxic substances and aerosols found around the home are popular among adolescents. Addiction to illicit drugs is a serious problem here in the U.S. but there are many treatments and strategies that can help illicit drug users quit their habit.

There are many different kinds of illegal drugs being trafficked out on the streets all across the U.S. Half of all illegal drug users will begin with cannabis, followed by pain pills and then inhalants. The National Survey on Drug Use and Health estimates that about 9.5 percent of the American population was using illegal drugs in 2002. Some types of drug use have declined, like cocaine, while other drugs such as cannabis and methamphetamine has risen. Some of the different kinds of illicit drugs and the effects of illicit drugs are listed below:

Opiates are drugs that are derived from the opium poppy plant, and include: opium, morphine, heroin and codeine. Synthetic opiates include Fentanyl and Methadone. Opiates are central nervous system depressants that are used as painkillers, analgesics, cough suppressants, and anti-anxiety medications. Long-term use of opiates may cause malnutrition and a weakened immune system, leaving the addict at high risk for infections and disease. Opiates are highly addictive illicit drugs that produce various effects such as:

Depressants include barbiturates, quaaludes and benzodiazepines and are known as sedative-hypnotics. They are used as anti-convulsants, anesthetics and anti-anxiety drugs and are potent central nervous system depressants. Some of the adverse effects of depressants include:

Stimulants are drugs that speed up the central nervous system, and include cocaine and amphetamines. Stimulant medications are used to treat narcolepsy, obesity and Attention Deficit Disorder (ADD). Stimulants enhance the effects of dopamine and norepinephrine in the brain, and can create feelings of euphoria. The use of stimulant medications has increased over the years, and this has led to greater availability for non-medical use. Some of the adverse effects of stimulants are:

Marijuana is derived from the cannabis sativa plant and contains two compounds, which are: the psychoactive ingredient delta-9-tetrahydrocannabinol (THC) and CBD. THC is stored in the fat sells of the body and is slowly released, and it is the compound that causes addiction to the drug. The long-term effects of marijuana are:

Hallucinogens include mescaline, psilocybin mushrooms, PCP and LSD. Hallucinogens are mind-altering drugs that distort the perception of reality. These drugs interfere with chemicals in the brain and create a variety of effects such as:

There are many different kinds of illegal drugs being used recreationally, and many people have become addicted to these substances. Addiction causes physical, psychological, social, familial and financial problems for the addict. It can cause accidents and legal issues that can leave the addict with a host of problems. Some addicts who engage in risky behavior can contract HIV/AIDS, hepatitis and STD’s. The effects of illicit drugs can also alter the physical and chemical structure of the brain and in some cases may cause permanent brain damage.

If you are using illicit drugs and find that you cannot stop, you need the help of drug addiction specialists. Treatment is available at a drug rehab center, where you can recover from drug abuse and addiction. Contact White Sands today to begin a detox and rehab program and be free from illicit drug use.