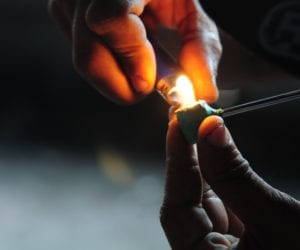 The Telltale Signs of Ice Use: Know the facts and learn to spot the warning signs.

The stimulant drug Ice is the purest form of methamphetamine and is commonly known on the street as crystal meth. It comes in a crystalline form, looking like glass fragments or shiny, bluish-white rocks and although it is considered the purest form, it can still be cut with other chemicals. According to the Australian Government’s National Drugs Campaign, this drug is commonly associated with violence due to its increase of the fight or flight reaction resulting in people responding more aggressively to certain situations. It is important to know the telltale signs of ice use.

What are Ice Drug Effects?

Ice is commonly smoked, injected or swallowed and depending on which way it is administered will depend on how quickly the user can feel it. The wait time can be anywhere from immediately to 20 minutes after ingestion. Once “high” the drug fades quickly leading to users often taking repeated doses.

Ice drug effects can first appear to have a positive effect and are described by users as feelings of clarity and energy. These effects are felt due to the increase of dopamine in the system. However, ice drug effects can have negative consequences that can be seen in methamphetamine psychosis which is a type of paranoia with hallucinations along with the comedown phase or crash. Other telltale signs of Ice use can be noted in physical effects such as dilated pupils, reduced appetite, and an increased sex drive.

Long-term effects of one use can lead to a destruction of receptors in the brain allowing the user to no longer feels normal without it. Along with the transmission of serious diseases and other negative physical consequences.

What are the Common Telltale Signs of Ice Use?

The use of Ice can put a lot of stress on the body due to the fact that user no longer feels the need to eat or drink. Ice drug effects are also reflected in the user’s ability to calm down and go to sleep. The following are some of the common telltale signs of Ice use:

What are Common Ice Drug Effects During the Crash or Comedown?

Users commonly take drugs like Ice in either “binge and crash” or “run” patterns. The run pattern means that the user gives up food and sleep while taking the drug over a span of several days. When the drug begins to wear off, or the supply runs out, the comedown symptoms can last from a few hours to a few days and can include:

What are Long-Term Effects of Ice?

There are many long-term effects of Ice ranging in differences of severity. Users can run the risk of having kidney problems, including kidney failure, lung problems, severe dental issues like sensitivity, cracked teeth and or cavities and gum disease. Other possible long-term effects of Ice can come from the injection of the drug. Users who inject the drug run the risk of contracting infectious diseases such as HIV and Hepatitis B and C due to the contact with blood or other bodily fluids. It is also possible for the judgment and decision-making of the users to be altered leading to the possibility of unprotected sex.

As stated above, long-term effects of Ice can damage receptors in the brain not only making the user feel like they cannot function without the drug but it can also affect areas of the brain involved with emotion and memory. According to the National Institute on Drug Abuse, users of drugs such as Ice have an increased risk of developing Parkinson’s disease altering the nerves that affect movement.

What Can Users of Ice Do to Get Help?

According to the National Institue on Drug Abuse the most effective treatments for abuse of drugs that fall into the methamphetamine category are; cognitive-behavioral therapy and motivational incentives. These types of therapy help the user cope with their situation and encourage them to remain drug-free.