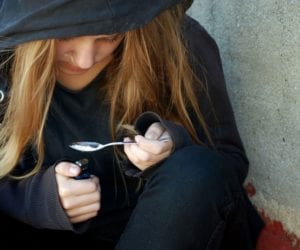 Wondering if someone you know is using heroin? Learn how to recognize the visible signs of heroin to find out

Is your child or someone else you know using heroin? Heroin use is on the rise in the United States, in large part because the epidemic of opiate addiction. Individuals who had no previous involvement with illegal drugs are starting to use heroin as a cheap and easily available substitute when their prescriptions for opiate painkillers run out. If you are concerned that someone you know may have begun to abuse this dangerous drug, there are certain visible signs of heroin use that will help confirm your suspicions. If you notice several of these signs in someone you love, there is a strong possibility that he or she has begun using heroin.

Visible Signs of Heroin Use

Once someone starts using heroin, visible signs of their drug abuse begin to show in his or her appearance. The visible signs of heroin use appear once the person takes heroin and can persist for several hours.

Physical signs of heroin use

Over time, as heroin use becomes habitual, physical signs of heroin use can be seen in users’ personal appearance.  Sudden weight loss can occur because heroin suppresses the appetite. Heroin users often wear long sleeved shirts and jackets to conceal their track marks, even when the temperature is too hot. Other physical signs of heroin use include, negative changes in physical appearance such as signs of poor grooming, disheveled hair, and lack of general hygiene.

While heroin users typically do not take their drug in front of other people, there are often physical signs of heroin use left around users’ living rooms, vehicles, or bedrooms.  One of the symptoms of heroin use is clouded thinking, which helps explain why these signs that seem so obvious to others are not better hidden.

Behavioral signs of opiate use

Once individuals begin abusing heroin or other opiates, their behavior changes in noticeable ways. The behavioral signs of opiate use include missing school or work. Users begin lying about their whereabouts and activities, and broken promises become common. Heroin and opiate users often pull away from friends and family, as their sole focus become obtaining and using drugs.

If you notice any of the visible signs of heroin use in someone you love, you should get them into treatment for drug addiction as quickly as possible. Fatal overdoses of heroin can occur at any time, simply because users were given a stronger batch than usual.