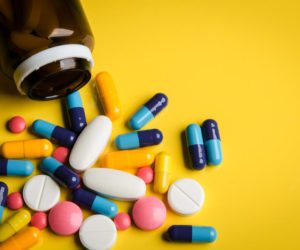 A Guide to Addictive Opiates: List of Opioids Strongest to Weakest

Creating a list of opioids from strongest to weakest is not as straightforward as simply listing them by potency or by an analgesic effect. A report released by the CDC (1) listed various narcotic pain medications by strength as they compared to morphine. Yet the list doesn’t determine whether the medication also has a similar mechanism of action. Some of the strongest types of pain medication in a hospital may have a similar potency to morphine, but they may also be formulated with a dose ceiling, while morphine does not, rendering them less potent overall.

The actual potency of some narcotic pain medications and prescription opioids, or pain relievers by strength, may also vary, depending on the route of administration.  Essentially, the list of opioids strongest to weakest is determined by factoring in that a smaller dose of certain painkiller medications may be required to achieve the same pain-relief response to treat severe pain as can be reached with morphine.

With those determinations in mind, the list of common opioids from strongest to weakest is also broken down into three classifications: stronger than morphine, morphine-equivalent and weaker than morphine.

Opioid use disorders (OUD) are on the rise. Let’s take a look at some of the drugs that are stronger than morphine.

Fentanyl (Duragesic): Fentanyl is common among drug abusers and is one of the strongest opioids on the market and is the strongest pain medication in hospital settings. This drug can lead to abuse and addiction. The opioid painkiller medication has a rapid onset and short duration of action. It’s occasionally used as a part of the anesthesia process to help prevent pain following surgery but it is also used to treat severe pain. Depending on the method of administration, it’s estimated that fentanyl can be up to 100 times more potent than morphine and is classified as one of the strongest opioids.

Oxymorphone (Opana ER, Numorphan): Oxymorphone is a semi-synthetic opioid painkiller medication commonly used to treat severe to chronic pain and to maintain anesthesia. The powerful opioid medication is highly addictive and requires an opioid addiction treatment program to overcome, leading the FDA to ask the manufacturer to remove it from the US market in 2017.

Hydromorphone (Dilaudid, Exalgo, Contin): Hydromorphone is synthesized from morphine and is commonly used in hospital settings to treat moderate to severe pain. The medication is more soluble in water than morphine, which allows the drug to be delivered in a smaller amount of water.

Heroin (diamorphine):  Heroin is created by combining the morphine alkaloid with acetic anhydride to create a more potent opioid analgesic drug. While heroin was once used in medical settings, it was made a Schedule I Substance under the Controlled Substances Act in 1924 and is now an illicit drug used primarily for recreational purposes. It’s estimated that heroin is approximately 2 to 4 times more potent than morphine. Heroin addiction is a contributing factor to the drug epidemic that the U.S. is facing and is leading to mass overdose deaths.

Methadone (Dolophine, Methadone): Methadone is an opioid painkiller medication used to treat moderate to severe pain. It’s also prescribed to treat opioid dependence in methadone maintenance programs.  It is considered more potent than morphine due to its effectiveness against neuropathic pain. There is also a lower risk of the user developing dose tolerance with methadone (2) as compared to other types of opioids.

Oxycodone (OxyContin, Roxicodone): Oxycodone has a greater analgesic effect than morphine (6). The semi-synthetic opioid is synthesized from thebaine, an alkaloid found in the opium poppy and is approximately 1.5 times stronger than morphine.

Tapentadol (Nucynta, Palexia SR): Technically, tapentadol could be classified as stronger than morphine, as clinical trials (3) indicate the medication provides superior analgesic effects than equivalent doses of oxycodone, but with significantly lower gastrointestinal side effects. However, as tapentadol has a dose ceiling, so it’s listed as a morphine-equivalent ahead in order of strength to morphine.

Morphine (Astramorph, Avinza, Kadian): Morphine is created from the morphine alkaloid found within the opium poppy and is commonly used to treat moderate to severe pain. Approximately 70% of morphine produced is used as a base to create other opioid medications (5), including oxymorphone, hydromorphone, and heroin.

Hydrocodone (Zohydro ER): Hydrocodone is a semi-synthetic opiate analgesic created from the codeine alkaloid found within the opium poppy.  Hydrocodone is commonly used to treat moderate to severe pain and is predominantly used within the United States, with 99% of the world’s volume of hydrocodone consumed in that country. Hydrocodone is also commonly available in a variety of formulations, including combinations with paracetamol (Vicodin), ibuprofen (Vicoprofen), or aspirin (Lortab).

Pethidine (Meperidine, Demerol): Pethidine is a synthetic opioid painkiller medication and is usually prescribed to treat moderate to severe pain. While it provides almost equivalent levels of pain relief to morphine in treating post-surgical pain, the method of administration may differ and the dosage used may need to be slightly higher than the comparative dose of morphine to achieve similar results (4).

Codeine: Codeine is created from the codeine alkaloid found within the opium poppy that is commonly used to treat mild to moderate pain. Codeine’s efficacy comes from the drug being broken down in the liver into morphine. Codeine is the most commonly taken opiate medication in the world (5).

Tramadol (Ultram): Tramadol is an opiate painkiller medication used to treat moderate pain. The medication is synthesized as a racemic mixture using both components of R- and S-stereoisomers.

Laudanum (Opium Tincture): Of the list of opioids strongest to weakest, the least potent opiate is still available from some pharmacies in the US and UK. The formulation is used primarily to control diarrhea or to ease withdrawal symptoms in babies born to opiate-addicted mothers. In the 1800s morphine was known as laudanum and was readily available from grocers and markets, but was soon restricted once its addictive qualities were known. Today, laudanum is sold as a ‘tincture of opium,’ which contains approximately 10% (100mg) powdered opium, or the equivalent of 1% (10mg) morphine per milliliter. The tincture is considered a single formulation, as it contains all of the alkaloids found within the opium poppy.

WhiteSands Treatment Center offers all levels of care to those struggling with drug addiction and opioid drugs. Through substance abuse treatment programs, patients can regain control of their lives and learn to manage their addiction. There is a treatment option out there for you, so get in touch with our recovery center today to learn more.