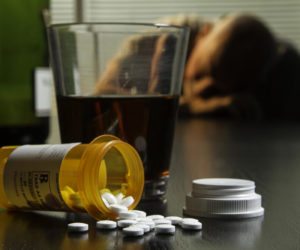 Abusing drugs is dangerous and far too often results in an overdose, but mixing them can be a death sentence. Some of the most dangerous drug combinations have showed up in the deaths of celebrities such as Cory Monteith, Michael Jackson, Heath Ledger, Anna Nicole Smith, Philip Seymour Hoffman, Chris Farley, John Belushi, and Elvis Presley. There are many more, as well as a long list of celebrities who overdose and died on a single drug. The body doesn’t care if the drugs were obtained legally or illegally. It will stop beating when it can take no more.

Everyone’s body chemistry varies slightly, which makes it nearly impossible to know what combination of drugs is the most deadly for a particular person. Mixing prescription drugs with over-the-counter drugs can also result in death. Illicit drugs and alcohol send thousands to the emergency room every year.

The news is full of stories regarding the fatal drug interactions between alcohol, opioids, and benzodiazepines. Less publicity is given to the deadly interactions between illicit street drugs and prescription pain killer. Street drugs include heroin (smack, brown sugar, junk), cocaine (candy, snow, blow), and MDMA (ecstasy, Molly). Many fatal drug interactions occur because there is always the potential for unknown ingredients to be added to any illicit drug by the unscrupulous “street chemist” who will use any substance to expand the amount of his or her product.

Deadly illegal drug combinations frequently include other substances in order to maximize the dealer’s profit. Talcum powder, benzocaine and lidocaine and other over-the-counter medications are cut into the street dealers drugs. This increases the risk of overdose, heart, and liver problems. Drugs are harmful enough when they are pure, but when cut with an unknown the risks are high. These deadly illegal drug combinations send people to the emergency room and sometimes the morgue.

If you or someone you love is struggling with drug addiction, don’t risk becoming a statistic. Call WhiteSands Addiction Treatment Center, and learn how they can help you overcome addiction and restore your life.