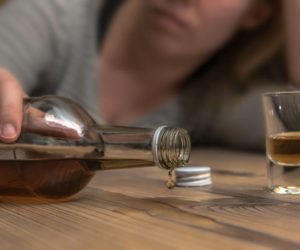 Heavy alcohol use and alcoholism is fairly common in the United States. The National Institute on Alcohol Abuse and Alcoholism collects national data on the use of alcohol. They released stats showing that seven percent of the adult population has had heavy alcohol use in the last month in 2015. Alcohol use disorder, also known as alcoholism, was present in roughly 15.1 million people, or 6.2 percent of the adult population. But what are the differences between heavy drinking vs alcoholism?

In this article, we will examine heavy drinking vs alcoholism and look at the signs of alcoholism to know when action is needed.

To better understand the differences between heavy drinking vs alcoholism, a classification of heavy drinking is required. Binge drinking, according to the NIAAA, is when a person drinks fives drinks in two hours for men, and four drinks in the same period for women.

The Substance Abuse and Mental Health Services Administration defines heavy drinking as a person who binge drinks at least five times in a month period. A person who is engaging in heavy drinking doesn’t necessarily have alcoholism, but drinking at this level opens the individual up to alcohol addiction.

From Heavy Drinking to Alcoholism

Alcoholism is not something that happens overnight, but rather with repeated abuse of alcohol, or heavy drinking and binge drinking. The more the person heavily drinks, the closer they are to becoming addicted and even physically dependent on alcohol. For each person, an addiction to alcohol may develop at a different pace based on their genetics, environment, peer pressure and several other factors of addiction.

If you see these signs in either yourself or a loved one, then rehab for alcoholics should be strongly considered.

What Should You Do Next?

If the signs of alcohol use disorder are ignored, it is very likely that the problem will worsen over time. Alcohol use disorder can affect every aspect of a healthy life if it’s not treated, including a person’s job, their health, their family and social life.

Rehab for alcoholics allows an addict to discover the roots of their substance use disorder and be helped to find new ways to cope with the stressors in their life.