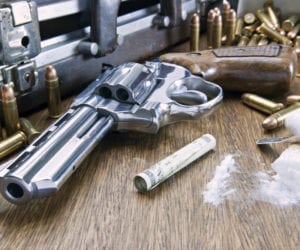 The Correlation Between These Two Vices

A huge problem facing many large cities across the U.S. is illicit and prescription drug abuse. Add guns into the mix and it is a true recipe for disaster. When an individual is under the influence of drugs, or alcohol for that matter, they are not in a clear state of mine and are more likely to make poor and risky decisions. Unfortunately, too many individuals who are high on drugs tend to get more confident and are more likely too grab a gun and use it if something were to bother them.

With assault comes imminent homicide and with homicide, comes jail time. Sadly, too many unfortunate events that take place across the nation are a result of drug abuse and gun violence. Another large contributor to gun violence and drugs are because of gang members and drug dealers, the vast majority of whom leverage their weapons of defense when deals go wrong or outside gang members step on their turf.

The top cities for gun violence throughout the U.S. are:

Gun control has been a topic of discussion for many years and is a difficult one to regulate as each state has its own unique rules and regulations regarding owning firearms. While many activists are calling for a complete ban on guns, research has indicated that this sort of weapon ban would simply not work, as guns alone do not fix a violence problem.

There is a strong link between substance abuse and violence. By addressing the root cause of gun violence, which is often believed to be drugs, the issues surrounding both of these problems can be addressed. The effects of ending the ‘War on Drugs’ would have a remarkable impact on gun fatality statistics and would have both immediate and long-term influences.

There are countless instances of individuals who have been convicted of alcohol-related offenses who are arrested for a firearm-related incident. Being intoxicated puts an individual at a higher risk of aggression, therefore, a higher chance of resorting to gun violence. There is very much a relationship between substances of abuse and gun violence and the scary reality is that oftentimes, the of alcohol or admittance of drugs is taken place in teh home where firearms are present.

While gun violence and substance abuse are a combination that will be a battle to fight, as a society we can advocate for stricter gun laws so that regulation and come into place. By implementing more stringent laws surrounding the ownership of firearms and the repercussions of having illegal firearms, the number of people owning them and missing them may lessen.