Adderall is the brand name of a prescribed drug used to treat attention deficit hyperactivity disorder (ADHD). This medication has a combination of two stimulants: amphetamine and dextroamphetamine. It has also been prescribed to treat narcolepsy. Patients struggling with ADHD can use this medication to increase their attention span and improve their focus. 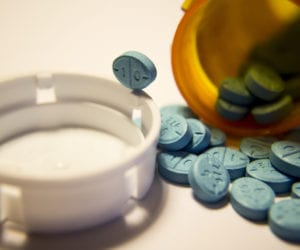 Adderall was FDA-approved in 1960. The combination of amphetamine and dextroamphetamine has also been approved as a generic drug. The brand-name drug is made by DSM Pharmaceuticals, while other companies make the generic form. Addreall XR comes as a capsule, while regular Adderall is a tablet.

The drug belongs to a group of substances known as central nervous system stimulants. It increases the levels of dopamine in the brain, and dopamine stimulates the brain and has a soothing and focusing effect on individuals with ADHD. While this can be helpful in certain situations, it can also lead to Adderall abuse.

Side effects of Adderall may include:

When more severe side effects develop, patients should call a doctor immediately. Serious side effects can include:

Adderall has been classified by the FDA as a Category C drug, meaning that there isn’t sufficient information to know whether or not it will hurt an unborn baby and so it may not be safe for use by pregnant women. Based on some animal studies, there is evidence of adverse effects in animal babies, but there are not enough conclusive studies to prove that these same effects occur in humans. A doctor or pharmacist should be able to give advice on whether or not a patient should take this medication during pregnancy. For women, this makes Adderall addiction treatment even more important.

Doses of Adderall are administered according to the patient’s needs. Doctors generally prescribe a low initial dosage, which can be increased depending on a patient’s response to it. Children older than 5 taking Adderall for ADHD generally start with 5 milligrams, increasing gradually to 30 mg . Adult dosage for patients with narcolepsy starts at 5 mg and can increase to 60 mg. Adderall and Adderall XR can be taken with or without food. The tablets are taken over several hours throughout the day, preferably in the morning, since Adderall taken at night can disturb sleep. Many patients take three doses each day for ADHD.

The substance should be taken exactly as directed by a physician. Patients should not stop taking this medication suddenly, as doing so can cause severe depression, drowsiness, and other symptoms of withdrawal. When a dose is missed, it should be taken as soon as possible. However, if the next dose is coming up, the missed dose should be skipped. Doses should not be doubled to make up for a missed dose.

The reason why this happens is that more young adults are being diagnosed with ADHD. Nevertheless, doctors are also prescribing it more to patients who do not have ADHD. The availability of this medication has increased its abuse. Individuals who do not have a medical condition, allowing them to take it, can experience intense euphoria due to the increase of dopamine levels in the brain. Due to this, many people have become addicted to it. Some may crush, snort, mix or inject them.

Drugs in the stimulant category increase alertness and attention. Many individuals who do not have an ADHD diagnosis have used this drug to improve their ability to think and focus. It has become very popular among students in order to boost their academic performance.

Stimulants in the same category as Adderall are generally called smart pills. This is the second most common type of drug used on university campuses. Adderall can only enhance thinking ability in those who have ADHD. Students who take this drug for academic performance can experience potentially harmful side effects. Abuse of this drug is not only dangerous, but it may serve as a gateway to more serious drugs as well.

Steven Mann, MD Dr. Mann currently serves as Medical Director of the WhiteSands Treatment Centers and he has held that position since July 2017. Dr. Mann is responsible for the medical needs and detoxification of patients at WhiteSands. Prior to joining White Sands, Dr. Mann has worked in addiction treatment facilities throughout Florida. He has served as an Adjunct Clinical Post-Doctoral Associate in the Addiction Medicine Division at the University of Florida, where he enjoyed teaching medical students and medical school graduates during their residency training.