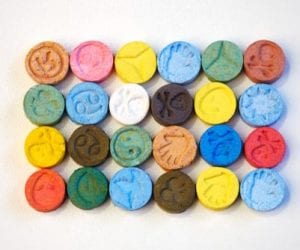 MDMA is popularly known as Ecstasy. It is a synthetic psychoactive drug composed of 3,4-methylenedioxy-methamphetamine. This drug is similar to a stimulant (amphetamine) and a hallucinogen (mescaline).

As a stimulant, MDMA raises a person’s alertness, energy and attention levels, and elevates heart rate and breathing. As a hallucinogenic drug, Ecstasy can cause hallucinations and distort someone’s perceptions of reality. Someone taking a hallucinogen may hear sounds, see images or feel sensations that don’t actually exist, though they sound, look and feel very real to the person experiencing them.

Ecstasy is not a legal prescription drug. It is sold on the black market illegally. MDMA has different “street names,” one of which is Ecstasy. Some other street names for MDMA include:

Ecstasy is listed by the DEA as a Schedule 1 Drug. These are substances that have no accepted medical use at the current time. They also are highly likely to be abused. Class 1 drugs are the most dangerous of the five drug classifications. They contain a high potential for psychological or physical addiction or dependence. Other examples of Schedule 1 drugs in addition to MDMA include heroin, LSD, marijuana, methaqualone and peyote.

A German pharmaceutical company, Merck, patented MDMA in 1913, though no person actually ingested any of it until fifty years later. Merck had hopes that the drug would help in the control of bleeding, and later supposedly hoped to sell it as a diet pill. The first human that reportedly took MDMA was a chemist who had once worked for DOW Chemicals, Alexander Shulgin.

Research therapists were experimenting with Ecstasy from 1977 to 1985 for possible uses in psychotherapy treatment. A group decided to sue the DEA in 1985 in an attempt to prevent the government from placing MDMA on Schedule 1. In July of that year, Congress placed an emergency ban on MDMA, soon making that ban permanent and placing it on the Schedule 1 list. In the meantime, researchers were using human volunteers to test the psychoactive effects of the drug.

Molly is in current use and on the increase among college students and young people. Younger teens in high school are also using Ecstasy at higher levels than previously known. It is an extremely popular recreational psychoactive drug.

Ecstasy is available in tablet form to be ingested. As a tablet, Molly is often referred by its street names E, X or XTC. The tablets are the most widely used form of ecstasy, yet they are also the most highly impure form, often containing other chemicals that can be extremely dangerous, such as LSD. Molly is also sold in capsule form and may be cut with cocaine. MDMA is also developed as a crystalline powder that is purely 3,4-methylenedioxy-methamphetamine. Ecstasy is swallowed, though a minority may snort the powdered form. The tablets and capsules are swallowed and the powders are usually mixed with a drink or just ingested straight without mixing it with liquids.

The following are the recreational effects one experiences or can experience when under the influence of MDMA:

Adverse Effects of Ecstasy Use

There are immediate short-term effects that can pose serious health risks. These include:

Ecstasy also can have after-effects lasting up to a week after usage. These include:

There are long-term effects of using MDMA, especially when used for an extended period of time. Brain lesions can form, affecting serotonin levels and causing a form of brain damage. Impairment in many aspects of cognition can occur, affecting memory, sleep and visual perception.

Those who use Molly consistently for recreational purposes can become psychologically and physically addicted to it. The longer one has been using MDMA, the more difficult withdrawal becomes.

Typical doses of Molly vary from 80 mg to 160 mg per tablet. As the dose increases, the brain burns up more serotonin, depleting it.

Symptoms of MDMA withdrawal can include:

Withdrawal from MDMA includes a period of detox, preferably in a clinical setting for up to a week. Each case is individual, however, depending upon the person’s dosing habit and psychological needs. If an MDMA addict suddenly stops using the drug, they may need medical treatment because severe withdrawal symptoms can become life threatening.