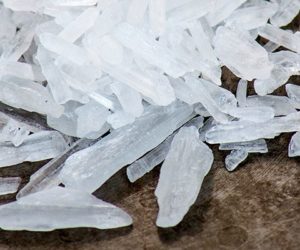 Methamphetamine is a Schedule II stimulant under the Controlled Substances Act. The potential for abuse is high. It has limited medical use. There is only one legal form of methamphetamine, known as Desoxyn. It is very limited to conditions such as obesity and ADHD (attention deficit hyperactivity disorder). All prescriptions are not refillable.

History of Methamphetamine and Trends

Methamphetamine is still a popular drug of choice, concentrated in the Midwest, but still permeating all of the United States. As meth has gained popularity, the mixture of what is sold as meth has changed. Meth is mainly made with products containing pseudoephedrine. The Combat Methamphetamine Epidemic Act of 2005 makes sale of any non-prescription products containing pseudoephedrine, ephedrine, or phenylpropanolamine to be placed with products behind the counter or in a secured cabinet. Buyers must show identification and sign for the sale.

Effects of Meth Use & Symptoms

Methamphetamine has a high rate of addiction. The stimulation of the central nervous system occurs when the drug is smoked, swallowed or injected. Once consumed, the user experiences a “rush” as the drug sends powerful stimulation throughout the body.

Methamphetamine has become a common substitute for less accessible drugs like heroin and cocaine, as their euphoria and stimulating effects are similar.

Methamphetamine withdrawal has two formally recognized steps. The first 24 hour period the user experiences heavy drug cravings. The need to avoid a crash makes drug cravings for a stimulant concentrated in the beginning. Lengthy sleep also occurs as a user usually has been up for days at a time, the body craves much needed sleep.

Long term, the methamphetamine withdrawal can be lengthy and needs to be monitored. The first few weeks symptoms may not be as powerful as the first 24 hours, but may still be present and disconcerting. When withdrawal lasts months or years afterward, it is then an acute syndrome. The likelihood of entering the acute phase depends on how long and how much meth was consumed.

Since methamphetamine cessation and treatment are potentially serious to the user’s well-being if it is not treated and monitored properly, the best choice is a treatment center with qualified professionals. First, a detox under medical supervision is necessary. Then, a combination of different therapies including good nutrition, behavioral therapy, medical supervision and supervised medications help a user become a person who maintains a meth-free lifestyle.

Don’t hesitate to call us at 877-855-3470 to discuss your needs or the needs of a loved one. Our health professionals are highly trained to provide the best care and assist you during this difficult time. Contact us so we can plan a course of treatment so addiction doesn’t have to be part of your life any longer.