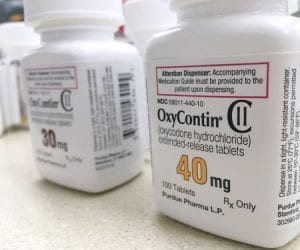 OxyContin is a narcotic drug used in the treatment of moderate to severe pain, and is the brand name of the analgesic drug oxycodone, a Schedule II morphine-like narcotic. Oxycodone is a derivative of opium and is often used along with non-narcotic analgesics such as aspirin or acetaminophen, which increase its ability to help reduce pain. As an opioid drug, OxyContin is very effective in alleviating pain caused by arthritis, injuries, cancer, bone pain, severe burns and other medical problems related with pain. OxyContin increases the levels of the pleasure chemical dopamine, which are brain neurotransmitters, and also stimulates the reward center of the brain causing a euphoric high. This euphoric side effect is often the reason behind the drug being abused and used for non-medical reasons. OxyContin has been widely prescribed because of the medicine’s ability to control pain around-the-clock with its time-releasing properties. Each tablet also contains a large dose of oxycodone, the active ingredient in OxyContin, which offers patients the ability to take the drug less often because of its potent effect on pain. This drug has a half-life of two to four hours and peaks in blood plasma one hour after ingestion.

OxyContin Use and Side Effects

The most common side effects of OxyContin include:

Severe adverse reactions and overdose symptoms from taking the drug include:

Medical help should be sought immediately if an individual is experiencing severe side effects.

In addition to these side effects, there are reports of inadvertent overdose with OxyContin when individuals have crushed the tablet rather than swallowing it whole. This allows a large, potentially fatal dose of oxycodone to be absorbed by the body too quickly. OxyContin can also cause serious side effects in individuals with severe asthma or breathing issues, and some cases have been reported of individuals who have stopped breathing or experienced shallow breathing from just one use. It should also be noted that this drug could have serious consequences when used with alcohol or other downers because it can cause respiratory depression and death. When mixed with stimulants such as cocaine, meth or amphetamines, side effects can include stroke or heart attack.

OxyContin is one of America’s most abused drugs due to its widespread availability and euphoric side effects. Because this drug is a highly addictive opiate, many people who are seeking pain relief are concerned about using it. There are also some doctors who refuse to prescribe it for fear of legal repercussions, due to the many deaths associated with people who were addicted and died while using the drug. In the United States, OxyContin is only approved for oral use in pill form or liquid, and contains time-releasing properties so the drug is fed in small doses to the body over a certain time period.

OxyContin is both physically and psychologically addictive and the illicit use of the drug is in high demand. Individuals abusing or using the drug for non-medical purposes most often break the pill, chew it, crush it up and snort it, or dissolve it in water and inject it into the body. This causes the drug to be immediately released into the body, causing a fast euphoric rush or high that the user desires. For addicts, OxyContin is a very expensive drug, costing anywhere between $20 – $100 on average for one pill, depending on the milligram amount. The average abuser will use anywhere from 80 mg. to 320 mg. per day, putting the cost of this habit around $300.00 per day. While a 100-tablet bottle of OxyContin will cost several hundreds of dollars at the pharmacy, it will reap thousands of dollars on the street, making it very appealing to drug peddlers. The drug was reformulated in 2013 to make it difficult to crush the pill, as a deterrent to abusers of this medication. Because of this reformulation, studies show a decrease among addicts using OxyContin as their primary drug of choice. Unfortunately, many addicts then turned to heroin, which over time caused the increase in heroin usage to nearly double because of its availability, cheaper cost and ease of use.

Withdrawal symptoms of OxyContin usually begin within 30 hours after the cessation of the drug. The most common symptoms of withdrawal from the drug are:

If someone is addicted to OxyContin, the safest withdrawal option is to enter into a detox program where he or she can be slowly weaned off the drug while they are being monitored and treated. By going through a professional withdrawal process, the patient can avoid any medical complications that can become life threatening. The physician can help the patient through the detox process by prescribing certain medications that ease the symptoms of withdrawal.

When a patient has started withdrawal and then decides to start taking OxyContin again, they put themselves at great risk. Because the body’s tolerance for the drug has been greatly reduced by withdrawal, the patient can overdose on a much smaller amount than what they tolerated in the past. A majority of overdose deaths from OxyContin have occurred by people who went through withdrawal and then resumed taking the drug again, highlighting the need for proper physical and psychological recovery treatment interventions.