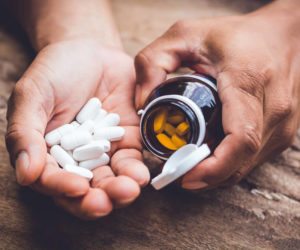 Vicodin is a compound drug that is commonly prescribed to relieve pain. The two active ingredients in the drug are hydrocodone bitartrate and acetaminophen (better known as paracetamol). The combination of these two drugs places Vicodin in the group of drugs known as opioid narcotic analgesics. The hydrocodone is the opioid narcotic drug, and the acetaminophen is the analgesic.

Vicodin was formerly a Schedule III drug in the United States, but was re-classified as a Schedule II drug in 2014. This followed a long campaign by drug awareness groups and medical experts who were growing increasingly concerned about the widespread abuse of drugs containing hydrocodone.

The level of abuse is down in no small part to the widespread availability of drugs containing hydrocodone in over-the-counter compounds. The FDA approved hydrocodone in 1943, but introduced regulations that meant it could not be sold in liquid form unless it was in combination with another substance.

As a result of this, manufacturers produced drugs that combined hydrocodone with antihistamines and analgesics. Respectively, these were cough medicines and pain relievers. Incredibly, the FDA seemed to take a rather casual approach to these compounds, even though the abuse of hydrocodone grew rapidly.

In 2013, the Centers for Disease Control and Prevention reported that around 75% of all deaths caused by overdosing on drugs obtained from pharmacies contained hydrocodone or other opioid analgesics. Also in 2013, Vicodin was 17th on the list of most widely abused prescribed drugs.

Vicodin was developed by Abbott Laboratories, but the drug is now manufactured by AbbVie, which is a spin-off company managing the former’s proprietary drugs.

Drugs that are categorized as Schedule II drugs are thought to have a high risk of creating dependency, and they are also considered highly likely to be abused. In terms of controlling access to the drugs, their presence in the Schedule II category greatly restricts who may write prescriptions.

The authorization to write prescriptions for Vicodin and other drugs containing hydrocodone has been restricted to fully qualified doctors. In the past, nurses or physician’s assistants could issue prescriptions. In addition, patients must attend in person at a pharmacy with a manually written prescription. Before hydrocodone was elevated to Schedule II status, patients had been able to fax or phone in prescriptions.

Vicodin is prescribed to provide relief to patients suffering from moderate to severe pain. Both the hydrocodone bitartrate and the acetaminophen have pain-relieving properties. The idea of combining two pain relievers was ostensibly to provide potency while reducing the quantity of each drug per dose, thus also reducing the chances of unwanted side effects.

However, it is highly likely that the combination was produced to provide an outlet for hydrocodone-based medications, which legally could not contain pure hydrocodone.

The prescribed dosage will depend on several factors. The drug is not intended for long-term use. People who are suffering from chronic pain should be prescribed alternative medications. Patients are advised to adhere strictly to the prescribed dosage, frequency and to the period for which the drug should be taken.

Patients tend to become addicted to Vicodin because of the narcotic effects of the drug. People who take large doses can experience euphoria, caused by the narcotic nature of the hydrocodone in the drug.

Tolerance to the euphoric effect grows quite quickly, and abusers need to increase their dosage quite often to achieve the same high.

When people abuse Vicodin, most of the physical symptoms are very similar to those of other narcotic drugs. They include:

Prolonged use can lead to liver damage. The liver metabolizes the acetaminophen in Vicodin, and the organ will begin to fail over time as a result. The failing liver will often lead to the patient having a jaundiced appearance.

Most fatalities directly associated with hydrocodone-based drugs are caused by the drug with which they are compounded.

It can be very difficult for people to cure their addiction to Vicodin. All narcotics have potent addictive qualities, and Vicodin is no different. The first thing anybody who is addicted needs to do is to come off the drug. Addicts who want to attempt to quit without specialist help should consult with their doctors. Doctors will often recommend a gradual reduction in dosage over time to prevent the occurrence of severe withdrawal symptoms.

Residential treatment is available, where the withdrawal can be monitored by medical personnel. Withdrawal symptoms include:

After detoxification, addicts should continue to receive support and encouragement to help them avoid relapsing. Professional counselors trained in addiction therapy can be a great help.