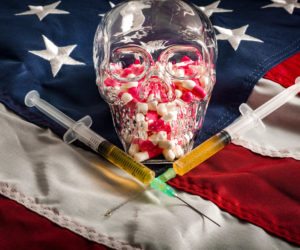 Many of us are aware of the opioid crisis that has been affecting the United States. Some states are taking steps to combat the spread of opioid abuse by making it mandatory to have opioid-specific education in schools. Some of the opioid crisis statistics emerging include around 90 people dying from opioid overdose every day, according to data by the National Institute on Drug Abuse. Along with this alarming number, it is estimated that the national economic burden of prescription drug abuse is around $78.5 billion on a yearly basis. In this article, we will look at the opioid crisis by state to discover which states are hardest hit by the epidemic.

Every state in America has been hit by the epidemic – some states more than others. The states with the highest opioid abuse rates include Texas and Alaska, due to the overdose rates. Below are the statistics for the opioid crisis by state.

According to reports by the Alaska Department of Health and Social Services Division of Public Health, Alaska had a higher rate of overdose from opioids than any other state in 2012. This amount was nearly double what any other state was.

In 2012, the state of Alabama actually had more prescriptions for opioid pain relievers that it had residents, making it one of the states with highest opioid abuse rates in the country. A number of prescriptions filled out was higher than other states at the time.

The opioid crisis statistics of California showed that around 72% of the 1,800 people that died in 2013 were from prescription opioids, according to the California Department of Health.

The state of Colorado is ranked second highest in the country for prescription pain reliever abuse, behind Texas.

DC was above the national average in number of prescriptions per 100 people at 85.7 for every 100 people.

Out of the whole country, Florida is ranked 11th in the number of drug overdoses that resulted in death. While not all of the deaths are related to opioid abuse, the majority are.

In 2012, there were 418 deaths that were a result of drug overdose. 81% of these deaths were linked to prescription pain relievers.

Kansas saw as many as 94 prescriptions for opioids for every 100 people in the state, putting it above the national average.

From 1999 to 2013, the number of overdose deaths from opioid abuse increased by an average of 5% every year.

Mississippi was ranked 6th in the country for number of prescriptions for opioid pain killers. The state had 120 opioid prescriptions per 100 people.

Texas is among the states with highest opioid abuse with four of its cities in the top 25 cities for opioid abuse in the country.

Looking at the opioid crisis by state, it is clear that the nation as a whole is dealing with an epidemic. If you require addiction treatment or a loved one is in need of rehab, do not hesitate to call the White Sands Treatment Centers today at (877) 855-3470.