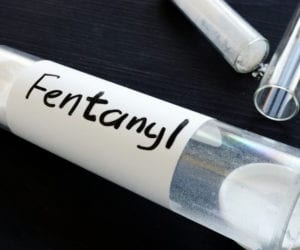 Fentanyl is an opioid prescription pain medication with numerous brand names such as Sublimaze, Actiq, Duragesic, Fentora, Instanyl, Abstral, and Lazandal. It is typically used to treat after surgery pain and patients suffering from painful terminal illness such as cancer. Fentanyl is also used in combination with benzodiazepines, a class of psychoactive drugs possessing sedative and anesthetic properties in pre-surgery procedures. In a medical setting, Fentanyl may be administered intravenously or as a transdermal patch, in pill form or as a flavored lozenge. In these formulation, Fentanyl provides potent, fast acting, short term pain relief.

Clinical research shows Fentanyl to be approximately 80 to 100 times more potent than morphine and about twenty times more powerful than heroin. This drug has also become widely used recreationally and in combination with illicit drugs such as heroin and cocaine. According to the National Institute of Drug Abuse (NIDA) this is a deadly combination that has resulted in multiple overdose deaths. On the street this drug may be referred to as:

When Fentanyl is used in combination with Heroin, on the street it is called; China White, Poison and TNT. The NIDA also caution users that mixing Fantanyl with street manufactured heroin and cocaine can dramatically increase the potential for tolerance, addiction and a fatal overdose.

The United States Food and Drug Administration (FDA) has classified Fentanyl as a Schedule II Controlled Substance. When a drug is placed in this classification it has successfully met the following criteria:

Fentanyl was first synthetized in 1959 by Dr. Paul Janssen. It was later patented for use by his company, Janssen Pharmaceutica. Because of the drug’s analgesic potency and powerful pain reducing effects, it was soon adopted for use in hospitals and introduced for use as an intravenous anesthetic under the brand name Sublimaze. By the ninety’s the Fentanyl patch was developed for transdermal administration. It was subjected to numerous clinical trials before it was incorporated into medical practice and was shown to be very useful for chronic pain management. The flavored lozenge or lollipop also designed for pain management quickly followed. These forms of administration became popular with terminally ill patients. Other formulations currently under development include an effervescent tab and a spray which are both designed for buccal absorption.

Based on information provided by the Substance Abuse and Mental Health Services Administration (SAMHSA) Fentanyl abuse and overdose can be difficult to detect and treat. Although tolerance to this drug develops quickly, addiction occurs at varying rates from one individual to the next. Another hindrance to detecting use of Fentanyl is that it will not show up in routine toxicology screenings.

There are many side effects associated with general Fentanyl which are also common with use of over the counter medication, prescription drugs and illicit drugs. However, in clinical studies the following side effects were experienced with Fentanyl test subjects. They include:

Overdose related to this drug may result in unconsciousness, coma, cardiac arrest, cardiovascular collapse severe respiratory depression, pulmonary complications or severe allergic reaction. It is also not uncommon for sudden death to occur when Fentanyl is consumed when it is mixed with other illicit drugs.

A comprehensive, integrated treatment process is the most effective approach for Fentanyl addiction. Patients with addiction to this drug may also have other underlying issues that could necessitate dual diagnosis treatment. A medical detoxification procedure is typically advisable because of the potency of fentanyl. Sudden withdrawal may result in adverse physical effects due to a drop in endorphin levels. As such, medical oversight during the Fentanyl cessation process helps to minimize discomfort and allow the medical staff to quickly respond in the event of life threatening effects. This initial phase of fentanyl addiction treatment is significant to the rehabilitation process.

In addition to medical detox, our drug rehab treatment Centers provides dual diagnosis treatment and relapse prevention training. Each treatment program is specifically designed and tailored for the individual after a thorough physical and psychological evaluation.

If you or a loved one is addicted to Fentanyl or have noticed signs of a developing dependency, get help immediately by calling our Drug Rehab Treatment Centers at 877-855-3470. We can help.