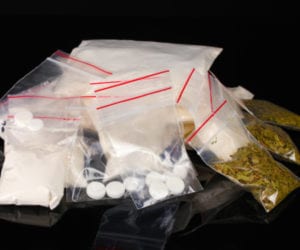 The Most Common Illegal Drugs Today

Of the long list of illegal drugs and substances capable of derailing lives and causing drug addiction, most can be legally prescribed by your family doctor. Many of these are indisputably known for their highly addictive qualities, depending on the type of drug. As such, a large percentage of people who are hooked on one or more of the top 10 most common illegal drugs segued into a chronic substance abuse lifestyle as a result of using a habit-forming medication their physician prescribed.

The problem with street drug/illicit drug addiction is that its effects stay in character on substance abusers whether you are addicted to a legal or illegal substance. Addiction as it is succinctly and simply defined by the National Institute on Drug Abuse (NIDA) is “when a drug user can’t stop taking a drug even if he wants or knows the drug is causing harm.” Once the transition from a doctor-prescribed medication to any one of the top 10 most commonly abused illegal drugs occur, people in addiction also find themselves immersed in the problem of skirting the law. Opioid addiction treatment can help patients overcome their drug and alcohol addictions so they can regain control of their life once again.

The top 10 most commonly abused illegal drugs that threaten the well-being of consumers today include:

1.) The illicit drug, Bath Salts or Synthetic Cathinone, can lead to drug addiction and became popular primarily among young drug users due to ease of accessibility and cost. Although this family of drugs has now achieved status as an illegal drug in at least 41 states in the United States with pending legislation in others, its shape-shifting characteristics kept it under law enforcement radar for many years. This fairly new family of recreational drugs may contain one or more chemicals such as mephedrone, methylone, and 3,4-methylenedioxypyrovalerone (MDPV) from the Khat plant. The ingenious name given to this product belies its true effects which range from euphoria, hallucinations, paranoia, and panic attacks to violent behavior, headache, nausea, and heart palpitations.

2.) Crack Cocaine is a type of drug – street drug –  that is considered one of the most commonly abused illegal drugs because of its potency, ease of accessibility, and affordability. Crack is the street name for cocaine that has been treated with hydrochloride and sodium bicarbonate that transforms into small chips or rocks for smoking. This method of administration has been shown to heighten the habit-forming potential of crack over the purer powdered form of cocaine.  Crack is a controlled substance that is illegal to possess, use, or distribute in the United States. Despite much-concerted effort to crack down on the rampant production and illegal consumption, the highly addictive nature of crack cocaine help to retain its popularity among those already in addiction to this drug.

3.) DMT is the abbreviated term for Dimethyltryptamine. It is often described as one of the most hardcore psychedelic substances being consumed by humans. DMT is known for its rapid onset, intense effect, increased heart rate, and relatively short activity. This drug may be consumed orally, by inhalation, or via injection. The most lasting effect of up to three hours is typically achieved through oral ingestion. DMT holds illegal status in most countries. In the United States, it is classified as a Schedule I drug under the Controlled Substance ACT (CSA).

4.) Ecstasy is, in essence, Methylenedioxymethamphetamine (MDMA). In recent years, this drug has also achieved notoriety as “Molly” through celebrity comments and rap songs. Because of its ability to increase empathetic emotions and heighten sensations, it is typically introduced to users in recreational environments. Adverse reactions to Ecstasy, as well as other commonly abused drugs, include memory problems, paranoia, increased heart rate, addiction, and spikes in the body that has been attributed to the cause of death in some cases. As MDMA, Ecstasy is listed as a Schedule I drug whose sentencing guideline has been successfully argued as being outdated in some courts of law but is still being upheld in most judicial systems across the nation. If you or someone close to you is using common illicit, drugs, get in touch with the WhiteSands team today.

5.) GHB (Gamma Hydroxybutyrate) is a central nervous system depressant that has been often been referred to as the “date rape” drug that is usually produced in makeshift home labs. It is primarily an odorless and colorless substance that is mostly indistinguishable when added to flavored beverages. GHB is also considered a “designer drug” because it is specifically designed for recreational purposes. Since even small amounts of this drug can cause blackouts, amnesia, overheating of the body, and dependence the greatest danger to the public is involuntary consumption.

6.) Heroin has long been recognized as one the most addictive substances and commonly abused drugs known to man. Based on scientific studies heroin’s lip solubility allows for rapid passage through the blood-brain barrier making it even more potent than morphine. This fast-acting effect, researchers say, is the lure that draws and keeps most users addicted to heroin. Heroin is listed as a Schedule I drug with a high potential for abuse and dependence. Once an individual becomes dependent on a drug, they require individualized substance abuse and addiction treatment to recover. Repeated use coupled with painful withdrawal symptoms is a common reason attributed to the persistent use of this illegal substance.

7.) Marijuana remains one of the most common illicit drugs on the planet. Its illegal status has been ferociously challenged for years by advocates of this controversial drug. Despite marginal wins to legalize medical marijuana in the United States and an overall softening by the public the federal stance according to the Drug Enforcement Administration retains Marijuana’s status as an illegal Schedule I drug for any purpose.  As such, those states that allow for the medical or recreational use of marijuana are in defiance of federal law. Marijuana’s addictive qualities can make people become dependent on the substance. Drug addiction treatment for marijuana can help patients manage their cravings.

8.) Methamphetamine commonly referred to as Crystal Meth is a central nervous system stimulant that scientific studies show releases noradrenaline, dopamine, and serotonin from nerve terminals in the brain. The excessive neurological stimulation of postsynaptic receptors caused by this activity provides the explosive euphoria that drives repeated use and rapid dependence on this drug.  In fact, the effects are so powerful that in animal studies, subjects will repeatedly consume Meth until it kills them if use is not restrained. Methamphetamine is listed as a schedule II drug on the list of Controlled Substances in the U.S.  Schedule II drugs are defined as substances with a high potential for abuse and severe psychological or physical dependence.

9.) PCP Phencyclidine is a dissociative drug that induces hallucinations in most users. It is also commonly referred to as “angel dust” or more recently, “wet”. The psychoactive effects of this substance can last for a few hours.  However, complete elimination from the body has been known to take weeks in some individuals.  People intoxicated with PCP that have been linked to violent crimes, researchers suggest, may have a direct relation to the nature of the hallucinations they were experiencing. Currently, there are no legal sanctions for possession or use of this drug and penalties are extremely severe.  As a “Schedule II” controlled substance possession of PCP is usually charged under state law and in some instances offenders may also face federal prosecution.

10.) Spice “K2” or Synthetic Marijuana is a common illegal substance that bears a tepid resemblance to authentic Marijuana. Comprised mainly of shredded plant material that has been sprayed with a chemical to mimic the effects of the THC chemical found in the Cannabis plant. The federal classification for this drug has been temporarily placed into Schedule I designation under the CSA with the full effect to implement criminal, civil, and administrative penalties for manufacture, distribution, possession, importation, and exportation of products in this category the adverse effects of this drug vary based on the composition of the batch that makes up each package and long term side effects are still unknown.

Substance abuse and mental illness require help and they often require a period of medically assisted detox. If you or a loved or are struggling with drug and alcohol addiction, whether it is opioid addiction, illicit drug addiction, or alcohol addiction, please call WhiteSands drug and alcohol rehab center. We have various types of recovery programs including prescription drug addiction treatment. We have multiple locations across South Florida, like our Tampa drug rehab addiction center location. We also offer an intensive outpatient program (IOP) for those who require extra support post-treatment. Visit our locations page to see all of our residential and outpatient addiction treatment facilities near you. Our team will also run an insurance verification to see what addiction therapy is covered under your plan.