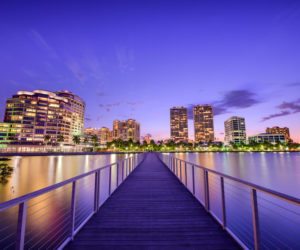 Palm Beach County – The Center of Opioid Epidemic in Florida

The opioid epidemic in Florida has reached new heights with the latest round of Florida opioid statistics. The state is examining the scope of the overdoses that are a result of opioid-based substance abuse. The crisis is now considered a national emergency after being declared as such by President Trump.

Florida is one of the hardest hit states in the opioid epidemic. It saw its second record-breaking year in 2016 with the highest recorded opioid-related deaths for the second year in a row. The main culprit in the deaths comes in the form of fentanyl – an opioid drug that is between 50 and 100 times more powerful than morphine. Due to the extreme potency of the opioid, people are turning up dead in public bathrooms, hurricane shelters and in their vehicles.

The Florida opioid statistics for 2016 showed that as many as 571 people lost their lives to heroin abuse – the substance that many prescription pain reliever abusers turn to when they can’t get their fix. A medical examiner in the state, Dr. Michael Bell, stated that Palm Beach County is at the epicenter of heroin, fentanyl and fentanyl analogs overdoses.

Looking at the opioid epidemic in Florida as a whole, there was an increase of 35 percent from 2015 to 2016 in the number of opioid related deaths. In 2016, there were 5,725 total deaths from opioid abuse. This means that around 15 people are passing away every day in Florida due to the epidemic.

The biggest increase in overdose cases in the State was as a result of fentanyl, which saw an increase of 97 percent from 2015 to 2016. Carfentanil, an elephant tranquilizer, has seen an alarming increase in usage during this time – a substance that was never intended for human consumption.

What is Causing the Rapid Increase In Deaths?

As the opioid epidemic in Florida evolves, public health officials are trying to get to the heart of what is causing the sharp increase in overdoses. It is suggested that due to introduction of fentanyl on the streets, it has opened the door to several other drugs, such as meth, benzos and cocaine. These substances have also seen an increase in overdose deaths, but as a combination drug used with fentanyl.

As users combine fentanyl with other hardcore street drugs, the risk of overdose is greatly increased. Oftentimes, the users are not aware of the combination of substances. It is becoming increasingly difficult to know what exactly is in the substance. The risk is not a deterring factor for addicts and even though they know the drugs are being laced, it’s not stopping them from risking it.

Furthermore, the potency of each batch of fentanyl fluctuates, making it difficult for the user to estimate how much they should take to be safe.

The ever-growing problems of the opioid epidemic in Florida will surely claim more lives before a workable solution is reached. The solution might come through the demonizing of opioid abuse, stopping illegal supplies from getting into Florida, making treatment abundantly accessible, through far stricter laws for distribution or a combination of solutions.